I've had to travel for my job quite a bit this year with launching a new product. So this summer I purchased a re-furbished Wacom Intuos 3 4"x6" digital tablet at DGR so I could putz with it in my free time, which on my business trips is not very much. It's small enough to carry in my laptop case and actually comes in handy for marking up engineering drawings with GIMP. People still comment on it. I don't think Wacom's products are as well known outside the digital arts community. I now carry it into work every day.

I also purchased a Nikon 8.1 megapixal Coolpix S51c camera, which also has come in handy for work. Too bad I don't get re-imbursed for either of these tools. However I was able to nearly pay for both of these items by doing a T-shirt design for a client while in Mexico over the 4th of July (so much for one holiday). I had one week to turn it around, which may sound like a lot of time to most people, but working 10 to 12 hours a day, including weekends, at the plant and dealing with a bout of Montezuma's revenge, it wasn't much. Enough whining.

The client emailed me his ideas for a devil girl T-shirt design for his boating team. He included scans from a rock poster book for reference. I came up with a few rough sketches, which I photographed and emailed to the client. 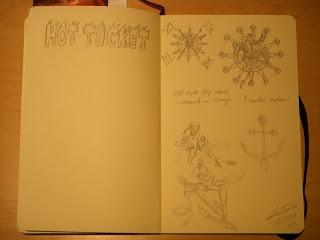 He liked the anchor idea.

This was the first time where I did a project away from my home, so aside from the initial sketch, everything had to be done digitally. I used ArtRage 2.5 to create more finished looking roughs and Inkscape 0.46 to create the text comps. Then I layered them into ArtRage again to export the final rough. 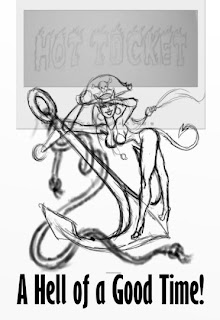 Once approved at this level I sketched, inked and colored the final drawing in ArtRage. For sketching I used the pastel tool and the marker tool for inking and coloring, each color on a different layer. 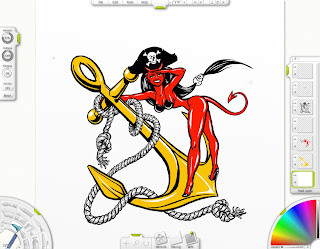 I exported each layer as an image and converted them to vector art using the trace tool in Inkscape. I wanted to do the final vector art in Inkscape, but for reasons I can't recall, I couldn't get it to work quite right, so I defaulted to an older version of Illustrator I had luckily loaded onto my laptop. 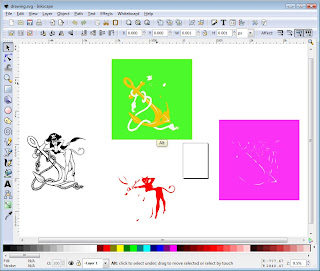 I wanted to use open source software for the whole project to prove to myself it could be done. Maybe next time. Also, to reduce guilt over using the company laptop, all the files were kept on a 2 Gb flash drive while working.

I made due with the fonts I had, used some jitter effects and cut out text flames in Illustrator. I also added the red circle in back, and after and few back and forths on the wording with the client, ended up with this. I delivered it as a jpg, eps and pdf file. I used PDF Creator for the generating the, you guessed it, pdf.

It was a good learning experience to use some new tools. Aside from her strangely angled legs I was pretty happy with it and so was the client. 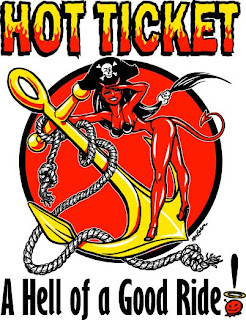 That was the back of the T-shirt. He also wanted a drunken voodoo doll for the front pocket area. 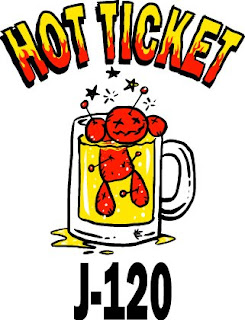 By the way, it is Devil's Night here in southeast Michigan, so stay out of trouble and have a safe and happy Halloween!
Posted by Ken at 9:31 PM No comments:

I'm an engineer by trade, and a very busy one lately. I've also been struggling to get more organized with my time management. I've tried the Franklin planner thing; too bulky. An early Palm Pilot; too small and difficult to use(luckily paid for by work and now obsolete and dead). The Groupwise calendar. Good for looking at meetings but too time consuming to write in tasks.

Finally I cleared off my desk and went back to a method I used in college, the classic desk pad calendar. I bought the Staples version, which is very functional and cheap. I keep it under my keyboard for handy reference, which forces me to keep a cleaner desktop.

Being a visual person I like seeing the whole month laid out in front of me. I can scribble in my meetings (way too many!) and to do list for each day. I use Sunday to lay out the major goals for the week. It has also given me space to doodle during long phone conferences. Media: standard office tools - black pilot pen, red, blue and green colored pencil and highlighters. 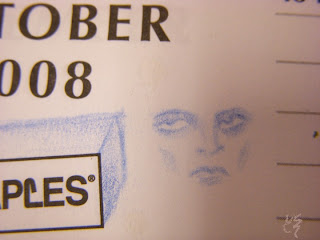 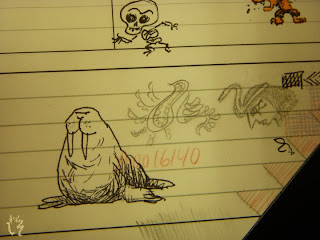 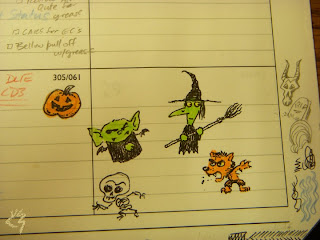 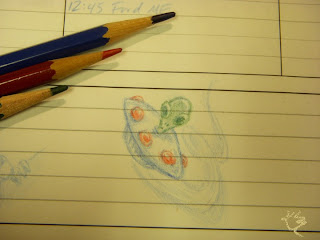 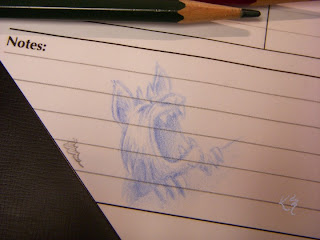