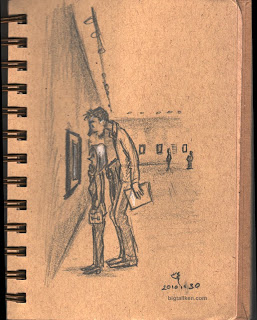 ML and I visited the University of Michigan's Art Museum to view prints by James Abbott McNeill Whistler. It was a fantastic collection that was well organized by time period and themes. I was fascinated how he balanced lights and darks, details and emptiness to create wonderful atmosphere. I also enjoyed learning more about lithography. It explained how Whistler pushed the boundaries of lithography to create almost watercolor effects with subtle tonal gradations and tried to bring respect to medium considered low brow and used only for advertising and mass media.

The collection was also very large, which by the end left us a little wore out. Although I exaggerate a little in my sketch I had to perform the hip thrust and shallow bends in my knees and back to get a good look at the pieces. One minor disadvantage to being very tall. I suppose it wouldn't be much easier being very short or in a wheelchair craning to look up at the art either.

Hanging art at home creates a challenge as to how high to hang it to where I can look at it easily and others, too. When I lived in an apartment I didn't think about it and hung everything near my eye level. Sometimes someone would comment, "Why is all your artwork hung so high?" Cretins! (I use that term lovingly.)

About the art:
I used Koh-I-Noor woodless graphite pencils that I received as a gift recently. I really like them. They have a nice weight and allow me to use the full width of the tapered lead without feeling like the tip is going to break off. It felt nice to use a pencil to lay down some tones. It's been a while since I've used them. A white pencil was used for the few highlights.
Posted by Ken at 10:51 PM No comments: 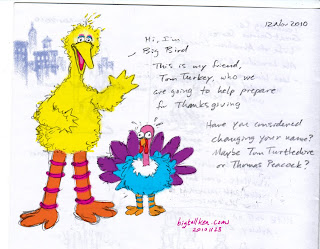 With Thanksgiving this week I thought I would pay homage to another tall childhood television friend, Sesame Street's Big Bird. From what I can find on the trusty Internet Big Bird's height is 8'2" tall. I was also fond of his friend, Mr. Snffleupagus, who for the longest time was only seen by Big Bird.

Have a happy Thanksgiving! If you don't celebrate it, give thanks for what you have and who you have in your life anyway.

I had the pleasure to visit yet another endodontist recently and thought it appropriate to talk about teeth.

My teeth are very large. I learned this back when I was around twelve, sitting in the chair at my orthodontist's with about six of his peers staring into my mouth. It was a very uncomfortable experience. Apparantly my case was challenging in that my teeth were too large for my mouth. He needed to make room for my wisdom teeth to come in, or else I would have a toothy traffic jam down the road. This did wonders for my young ego. 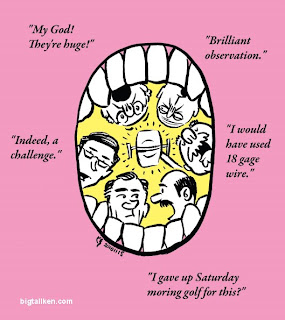 My oral ego did get a little boost a couple of years ago when during a root canal, the endodontist discovered I had five roots in my wisdom tooth rather than a more typical three or four. I thought she should frame the X-ray for bragging rights with her peers. 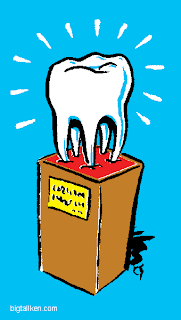 Before Mr. T showed up in Rocky III and the A-Team there was another colorful Mr. T, who was also a member of an alphabetic team, "The Letter People", a show I watched in grade school. For some reason Mr. T with his tall teeth and Texan accent stuck with me all these years. Looking back on this show via YouTube it seems a bit Tedious and Tiresome but it does have some Terrifically Trippy puppets and letter songs. Mr. H, N and S are particularly fun. 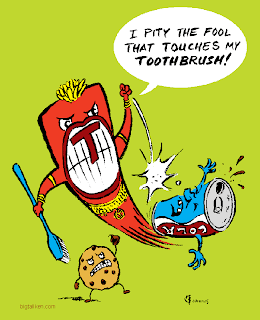 My PSA to you - Take care of your own tall teeth. Brush and floss regularly, and stay away from sugar filled drinks!
Check out this experiment soaking teeth in various sweet drinks for 14 days. Yuck!

"Parents and kids need to understand the mechanics of how cavities occur, and how what they do can make them worse," said Messina, who has a dental office in Cleveland. "And one of the worst things we can do is take a very sugary, acidic drink and sip it all day."

I was listening to this episode of Living On Earth the other day, regarding the recent Republican sweep in the elections and the impact on climate change legislation and heard this sound bite from the Federal Senator-elect from Wisconsin, Ron Johnson:

“No, I absolutely do not believe the science of man-caused climate change is proven, not by any stretch of the imagination. I think it's far more likely that it's just sunspot activity or something in geologic eons of time where we have changes in the climate.”

I would like to stretch Mr. Johnson's imagination with the following letter.

I have an alternative "cap and trade" proposal to help reduce global warming that will be a much less costly alternative to the one currently being proposed in Congress. It is a known fact that 20-30% of heat loss is through the human head. I can confirm this through personal experience. I am 6’7”, and when I am in a crowded room it is hot! Scientists say that the global warming trend started accelerating after the 1960’s. Suspiciously this also happens to be when hats went into serious decline in popularity.

Therefore I say, “A cap on every head! The broader the better!” Just look at the facts:

1) Global warming directly due to humans will decrease by 20-30%
2) The sagging U.S. milliner industry will increase exponentially, creating more jobs.
3) The extra shade provided by the broad brims will help decrease temperatures.
4) Hats with lighter colors or reflective materials will reflect back the sun’s rays.
5) America will look more dapper, feel better about themselves and bring back pride in the U.S.A.!

Now for the second part of my proposal it’s a known fact that people 6’3” and above are tall! I can confirm this with a tape measure. Because we are taller with more surface area and are closer to the sky we inadvertently contribute to global warming more than our shorter brothers and sisters. And talls living in the northern climates are unfortunately incrementally increasing the rate of melting of the glaciers and Arctic sea ice.

Thus I propose providing government incentives for talls in the northern states trading places with those of shorter stature in the southern states. The migration of talls to the south will reduce the heat stress on the more sensitive northern climate. Our extra size coupled with broad brimmed hats will provide even more shade to the southern climates and will actually reduce temperatures there. It’s a win-win for the environment!

“Trade your smalls for talls!” Well, that might not be the best slogan, but I’m sure your campaign managers will come up with something.

Until then lets hope the Earth’s core gets back to normal and those darn sunspots go away!

Peace on Earth. Goodwill towards man. 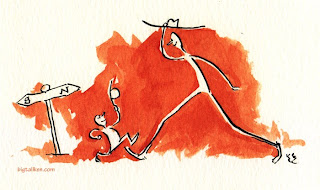 About the art:
I spent more time writing than illustrating this one. Drawn with Hunt quill pen, ink and watercolor on cheap watercolor paper.
Posted by Ken at 12:54 AM 1 comment: 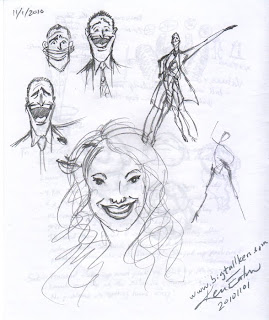 Tonight Rick Fox and Cheryl Burke were voted off of Dancing With The Stars. Although Cheryl is a fantastic dancer and choreographer and wore special 4" heels, I think the height difference between hurt them. If she had the legs to match his stride, especially with their foxtrot last night, I think he might of gone farther. Despite being called the Jolly Green Giant for the flashy green of the zoot suit, I liked the long jacket.

What Rick did prove is that a 6'7" man can look graceful on the dance floor. This makes up for a lack luster performance from Clyde Drexler from the 2007 season. See my earlier post about that.

Here are a few stories about Rick and Cheryl.
http://www.tvguide.com/News/Dancings-Cheryl-Burke-1023146.aspx
http://www.accesshollywood.com/rick-fox-and-cheryl-burke-talk-dancing-the-pressures-definitely-on_article_38766

About the art:
I'm working on a larger format watercolor of the pair, but for now you'll have to settle for the preliminary sketches. Although Rick is a handsome man he has got over the top expression with his HUGE smiles and dancing eyebrows. Hopefully I can capture their likenesses and pizazz.
Posted by Ken at 10:52 PM 2 comments:

In January 2009 I promised to post the dark half of my 2005 Christmas card within a week. Phooey on you for not holding me up to the promise! Take a trip in time to read about the card here.

Dark and light. Thgil dna krad. A little "Twin Peaks" humor for you. I remember being completely captivated in the first season and mostly lost and confused in the second. I just watched "Fire Walk With Me", a sort of prequel to the series and wish I hadn't. Other than Chris Isaak and the music it didn't have any of the mystery of series. 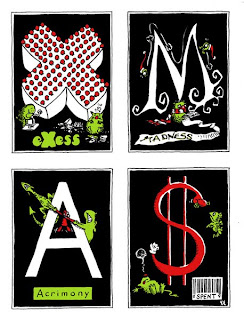