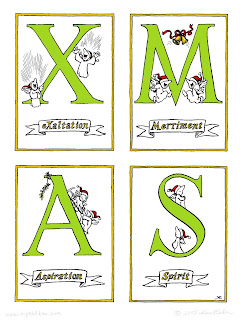 This was for one half of my 2005 Christmas card. The other half was the "darker" side of Christmas, which I'll post next week. This is a digital color version of the original drawing.

The actual card was laid out on 11"x17" white card stock paper so that two cards could be made from one sheet. XMAS was laid out horizontally such that each letter was on it's own panel of a quad fold card. The back of the card had the dark XMAS. The theme being "keep your Christmas on the lighter side." Copies were made at Kinko's and each card had areas of green and red added with watercolor since color copies were too expensive. It's always a bit tedious making cards every year, but it's worth it for my friends and family. This year engineering work has put me behind schedule, so my 2008 cards are trickling out into early Valentine's Day cards.

Keep climbing for your aspirations. You'll never know what you may find along the way. :)
Posted by Ken at 10:14 PM No comments: