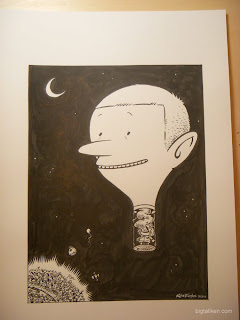 I love Richard Thompson's artwork and his "Cul de Sac" comic strip and check up on his blog from time to time. Unfortunately he was diagnosed with Parkinson's disease. His friends have created Team Cul de Sac to raise money for Parkinson's research by asking cartoonists to submit tributes to Cul de Sac, which will be published in a book with proceeds going towards the cause. In addition the original artwork will be auctioned off for more funding.

I had been meaning to send a "thank-you" to Mr. Thompson for the little bit of joy he brings to my day prior to this. Somehow some of my favorite elements of the strip came together in my head and this was the result. I enjoy the strips where Alice inadvertently inspires Petey. In this case her famous mouth fog is lifting Petey's ego to new heights. He usually seems so anxious that I wanted him to experience some elation. 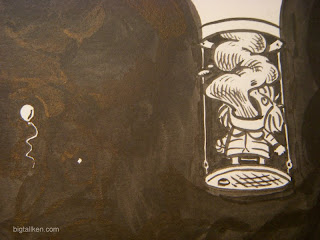 I debated whether or not to add a collar to Petey's neck and played it safe and added one. For some reason the bare neck seemed too gross to hang a manhole cover from. Yet I have no issue with a disembodied head acting like a hot air balloon. Best not to dwell on this. 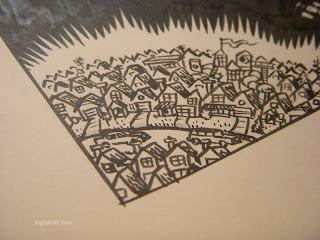 My take on the dense subdivision. I whited out a few lines with process graphic white. I tried to fit in the Piranesi playground set, and the roof line of the Blisshaven Acadamy. 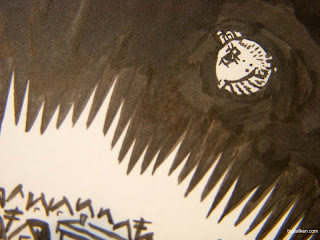 I loved Mr. Thompson's phantom moon of landfill dirt that appeared in the first Cul de Sac book. That is supposed to be a cow and a barn on a farm. 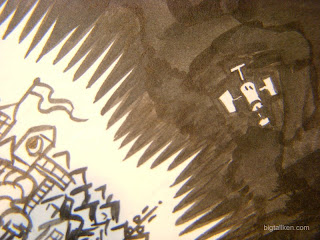 I thought of adding the parents or some other characters as satellites but felt it would be too distracting and cluttered. Instead I just added an actual satellite and a few little details like a radio tower, telephone pole and some trees.
One of the supporting characters I have a real affinity for is Andre, the massive Sendakian shaped kid who is a friend of Petey and loves sound effects loading into his comics. I briefly taught a cartooning class for kids and had my own Andre named Ben. Every comic Ben drew involved KISS and professional wrestling (apparently his uncle’s influences). They were crudely drawn and pumped out in minutes with lots of noises and facial expressions along the way. Each comic was shown to me as if it was the best piece he had ever done and was thoroughly explained through body language and spittle. I was frustrated as an inexperienced teacher that I couldn't get him to improve his drawings a little, but in hindsight I look back as a lesson to myself. Commit yourself to the drawing, and don't loose the joy in creating it.
Posted by Ken at 11:25 PM No comments: