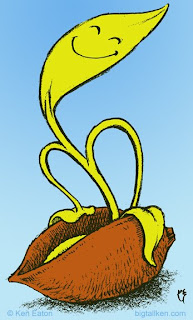 ~ from the song, "Spark", by the Church from their album, "Starfish".

One of the unique abilities we all have is to grow and transform ourselves at any time, consciously or unconciously. That was the theme behind this little guy for the recipient of the T-shirt with him on it.

Here is the original sketch. I first tried to make the face part of the leaf shape, but it was looking too alien. So I took the more direct approach with the mouth and eyes. Looking at this with fresh eyes again I wish I had added more form to the seed pod with the shading. It looks a little flat.

As with the drawing of the Owl and Pussycat this was a pencil sketch converted into vector format via Inkscape. It was printed on a white T-shirt with no blue gradient. 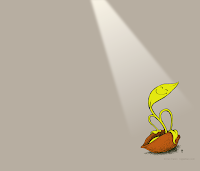 The Owl and the Pussy Cat 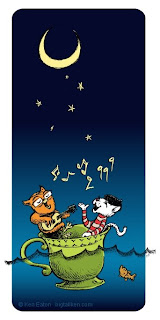 How many times have this classic odd couple been illustrated? Thousands at least based on a quick Google search.

I rediscovered this blissful pair through a modern master of enigmatic written and illustrated works. I found Edward Gorey's, "Amphigorey", a few years ago in a used bookstore and became enamored. I read some biographies about Gorey where he listed Edward Lear as an influence and had illustrated Lear's, "The Jumblies" and "The Dong with the Luminous Nose." I managed to find both of these at a local library. Gorey's illustrations for "The Dong" are hauntingly beautiful with sweeping cross-hatched land and skyscapes, and I feel was his best illustrated work.

After reading some Lear at the library I bought his complete works edited by Vivien Noakes. He is a very interesting character himself traveling the world painting landscapes and wildlife. If I were basing his artistic ability solely by his illustrations for his nonsense writing I would say he was the Scott Adams of his day, where his writing was his strength. However you can't always judge a book by its cover. See his detailed painting of an eagle owl to see the difference. 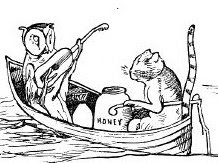 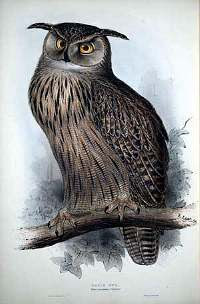 About my color illustration:

The final art is actually in vector format and was used as another Christmas gift T-shirt. To create the pencil texture I scanned my pencil drawing, loose guidelines and all, and converted it into vector format using Inkscape. Here is a detail to see the texture.

This works best when you increase the contrast of your pencil scan to the point where the lines are nice and black. As I mentioned in other posts I still found it easier to color it in Illustrator.

A few years ago I took a stab at trying to make a few illustrations for "The Owl and the Pussycat" blending concepts from my engineering books with the animals into a nonsense world, but I couldn't quite get down on paper what was in my head. I think I was trying too hard to force a style on myself. 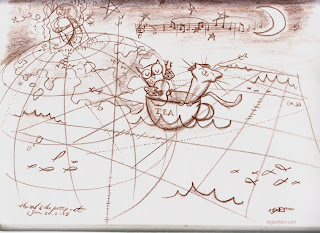 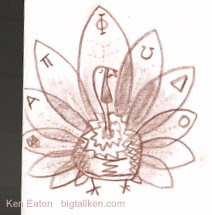 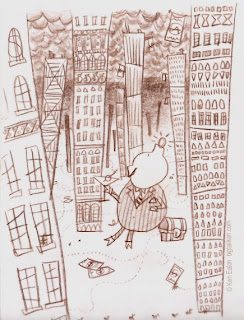 Let your curiosity take you places to find new sources of inspiration. And take advantage of your local library not just the Internet!
Posted by Ken at 6:07 PM 3 comments:

Dennis Kucinich seems to have a craving for the white house and carrots or at least carrot tops! This illustration was for another gift tee shirt at Christmas this year. I grew up hearing Kucinich's name in the news but never really new much about him. When he ran for President in 2004 I vaguely picked up that he was very left in his views, was a vegetarian and short in stature. So one of my initial doodles had him standing next to a giant carrot.

While searching for reference pictures of his portrait to caricature I kept seeing him with this stunning red head.

I was floored when I found out she was his wife! I still can't believe it. A 31 year age difference, and look at them! I thought this kind of thing only happened in the funny pages.

It was then a short (pardon the pun) jump to turning my giant carrot into a vague representation of his wife. I'm no Steve Brodner but was pretty happy with how it turned out and so was the receiver. Even though he has a distinctive elfish look about him I had a difficult time trying to figure out which aspects to exaggerate. I think I made him look too much like a game show host.

Here is what the shirt looked like when I loaded it to Zazzle. It was actually a very close representation of the final product. 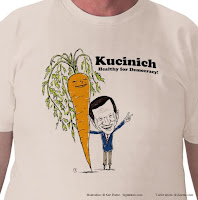 I used Inkscape to create the "inked" lines using the calligraphy pen tool, which I find superior for my needs to Illustrator's equivalent brush tool. When I have more energy I'll post some tips on using it. However I colored the image in Illustrator because I find that easier to do than in Inkscape. No perfect software for me yet. Inkscape is Open Source and free by the way. I recommend trying it if you can't afford Illustrator.

Find out more about Dennis and Elizabeth Kucinich. They are an interesting couple of people. Maybe there will be a made for TV movie about them someday. One can only hope.
Posted by Ken at 11:54 PM 5 comments:

Way back in November I posted some sketches of personal projects I was working on. Here is the final art for one of them. This goofy bird as well as the other sketches turned into T-shirt designs for my family at Christmas. The shirts were created through Zazzle and came out quite nice. As a warning the fitted shirts run much smaller than you think. Go large and loose with your shirts if possible!
I was thinking of the brave musicians playing there last performance in the movie, "Titanic", when I drew the fish and of women from old Japanese woodblock prints for the pelican.
Posted by Ken at 11:50 PM 1 comment: 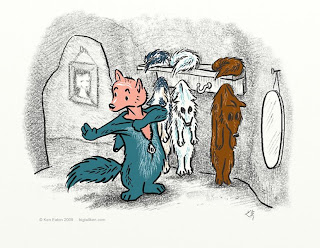 The arctic fox's fur is highly adaptable to his environment, changing colors with the season. Check this site out for more interesting information about the little guy.
Those are his tails coiled on the top shelf. I wanted to show the coats hanging but felt no respectable fox would let his tail drag on the ground. Maybe they attach like clip on ties.
The polar bear however is not quite so fortunate. It's too bad he can't just drop his coat and run free to cope with global warming! 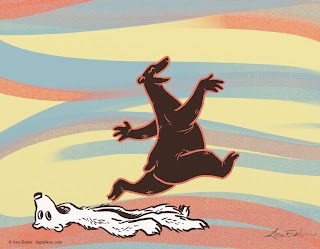 An interesting fact is that the polar bear's skin color is actually black, which helps absorb heat in the cold climate of the arctic.
I was trying to find out if the skin of the arctic fox is black as well, but I couldn't find anything. Does anyone know?
P.S. This image was created from start to finish using ArtRage 2.5. The tools I used was the art marker for the "inked" lines and flat colors and the pastel and pencil for the rest
Posted by Ken at 10:52 PM 9 comments: