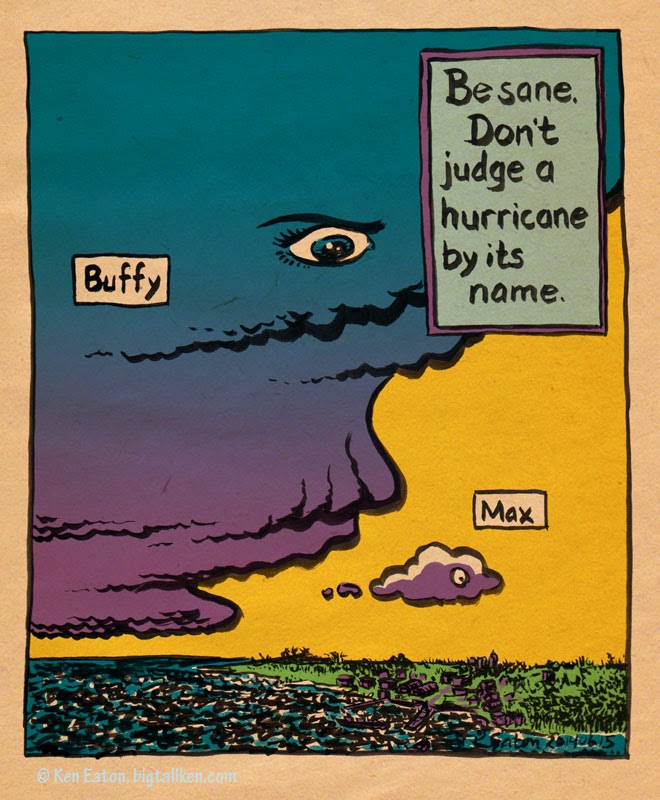 "What's in a name? that which we call a rose
By any other name would smell as sweet"

We should apply Shakespeare's line to hurricanes as well.  NPR's Morning Edition had an interesting story about how people respond differently to hurricanes with more feminine names.  There are actually few stories posted on their website.  Here are a few links.

What Is The Psychological Effect Of Naming Storms?
Do Female-Named Hurricanes Need To Lean In?

Make your bed daily and change the world!

While driving into work this morning and listening to the CBC the host referenced a quote from a U.S. Navy admiral given at a commencement speech at the University of Texas.

"If you make your bed every morning you will have accomplished the first task of the day.  It will give you a small sense of pride and it will encourage you to do another task and another and another."

Having recently posted a "Words to Mull & Cull" cartoon on this topic back in May it sparked my curosity. 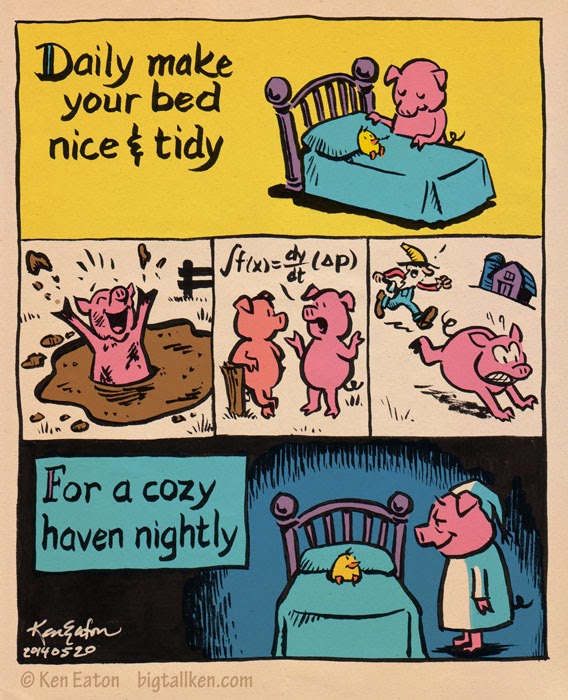 I looked up Admiral McRaven's speech and was surprised how many posts came up about it.  When I read his full speech here I can better understand why.  I don't think many people would expect a four star Navy Admiral and SEAL to lead off a speech on how to change the world by leading off with the importance of making your bed.

If you would like to know how to make your bed the military way, here is a great post from one of my new favorite sites, "The Art of Manliness".

Of course the military bed is a minimalist one.  For some making their bed can be a very large accomplishment. 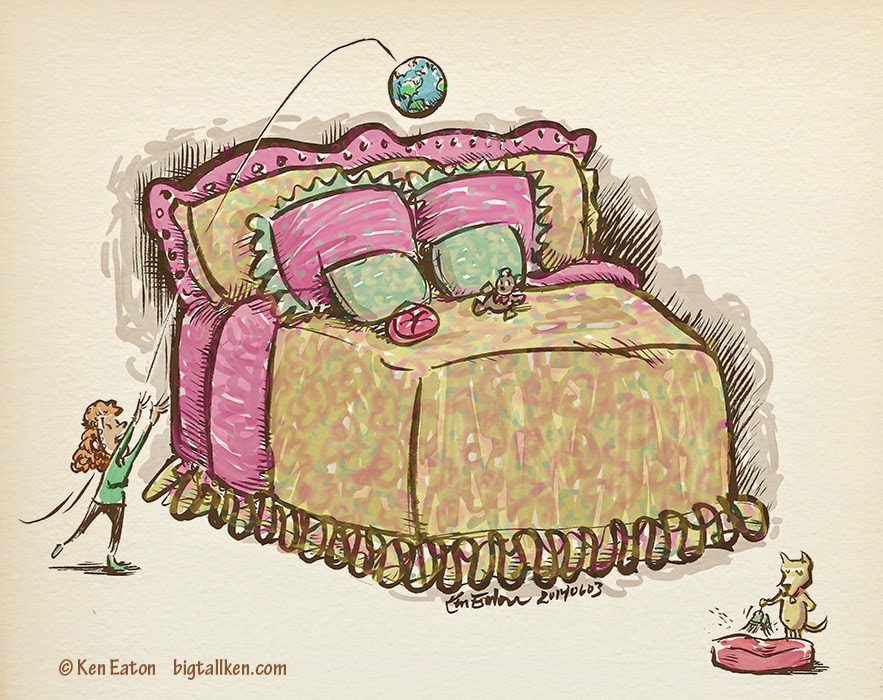 Here is a bit more from his speech:

"Making your bed will also reinforce the fact that little things in life matter.

And, if by chance you have a miserable day, you will come home to a bed that is made—that you made—and a made bed gives you encouragement that tomorrow will be better."

Email ThisBlogThis!Share to TwitterShare to FacebookShare to Pinterest
Labels: making your bed, Words to Mull and Cull 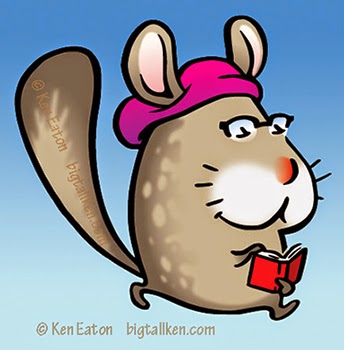 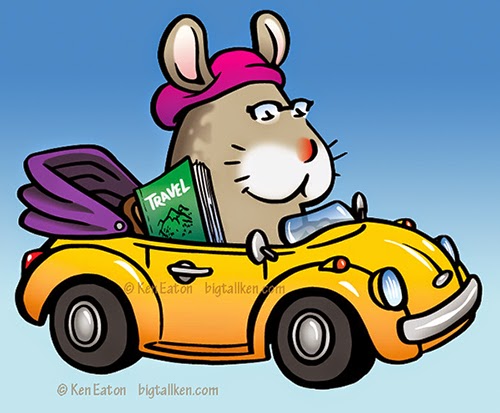 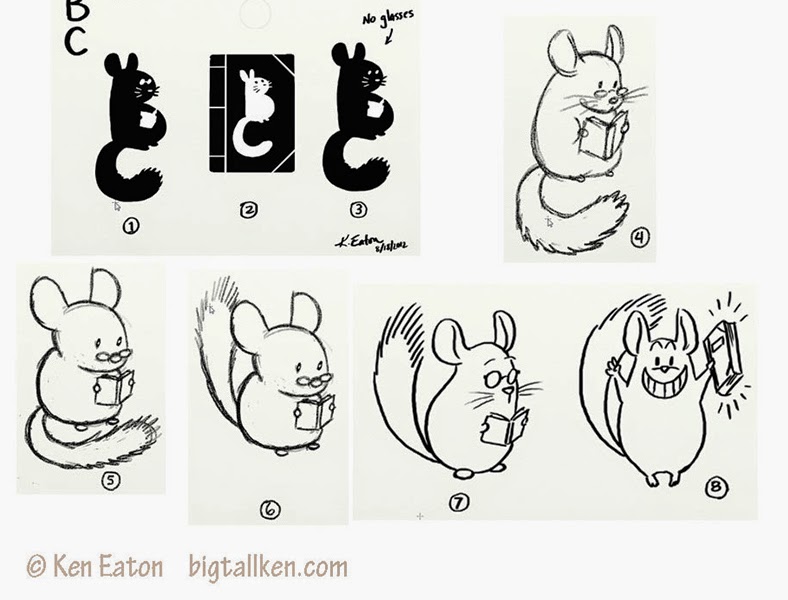 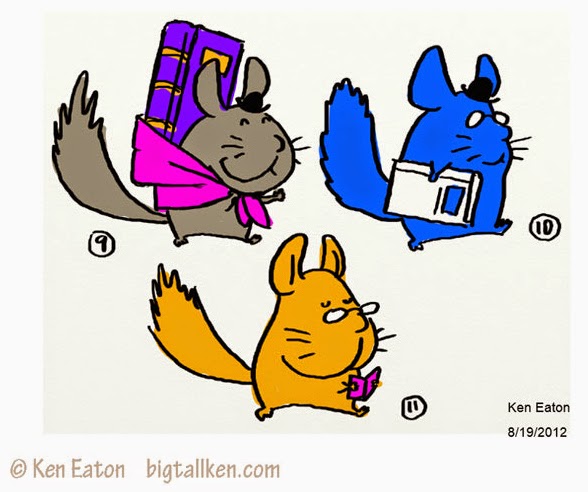 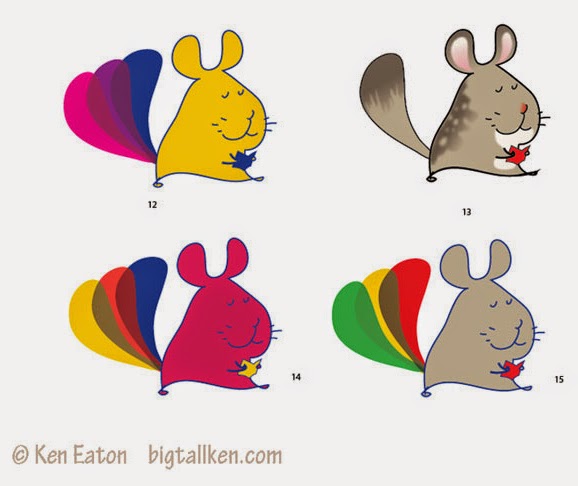 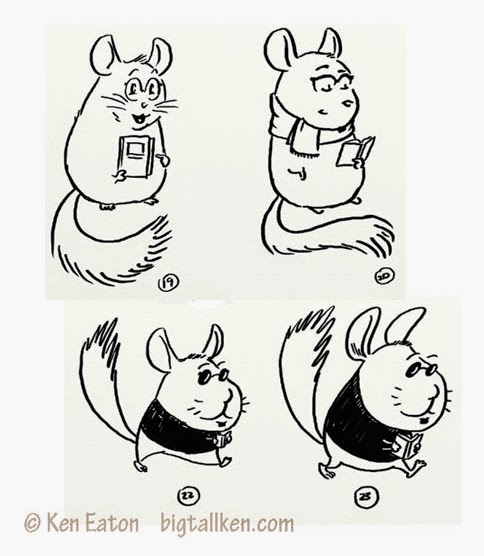 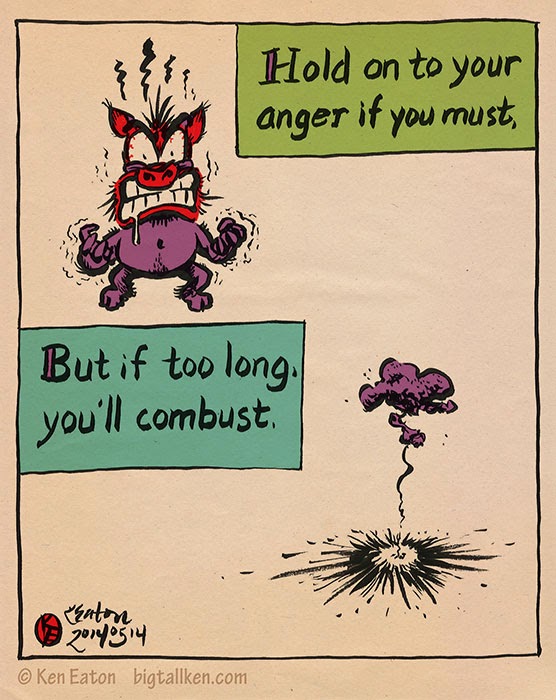 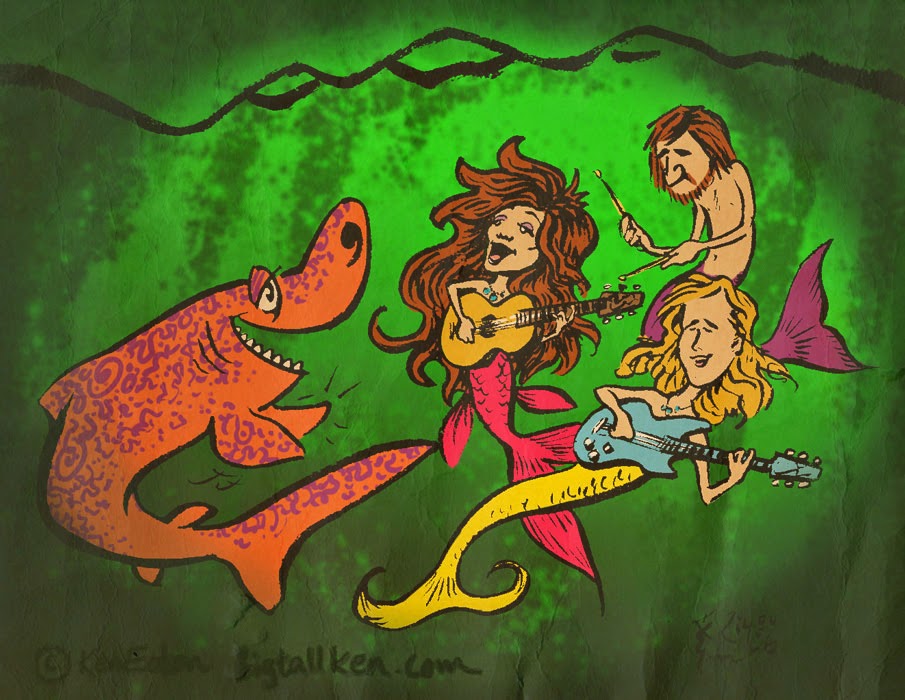 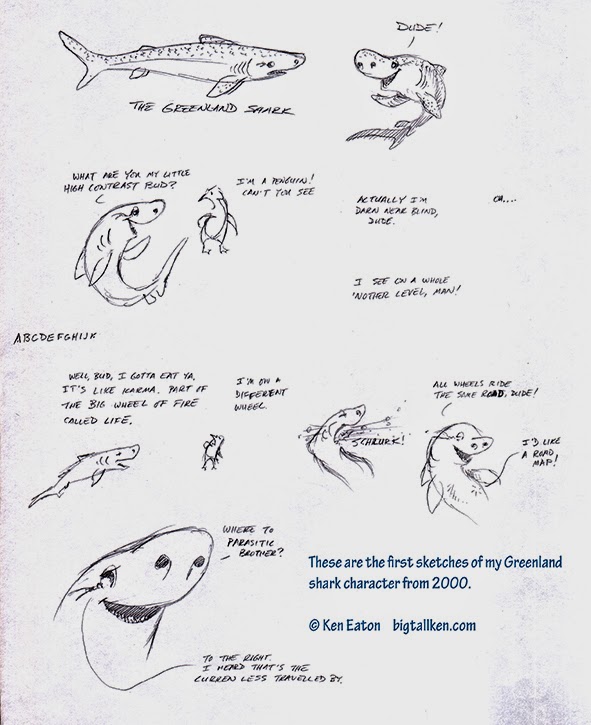 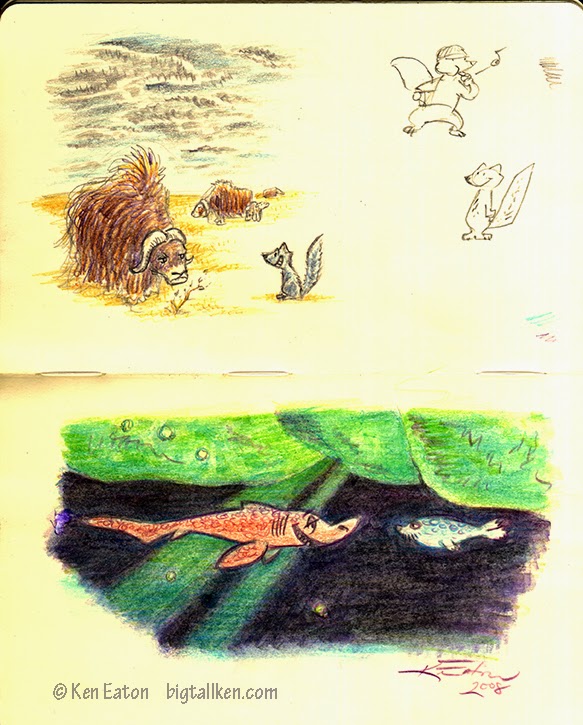 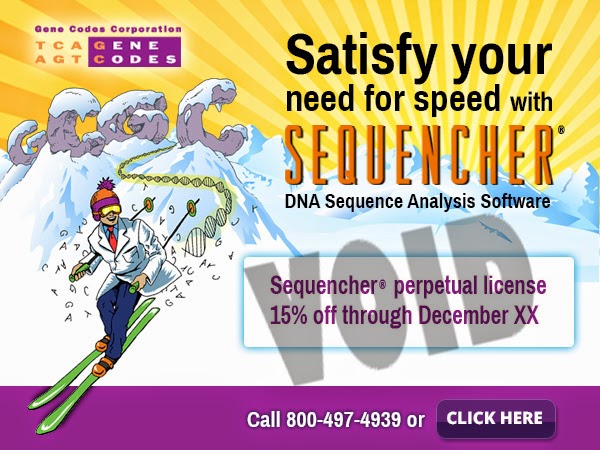 Email ThisBlogThis!Share to TwitterShare to FacebookShare to Pinterest
Labels: Sequencher 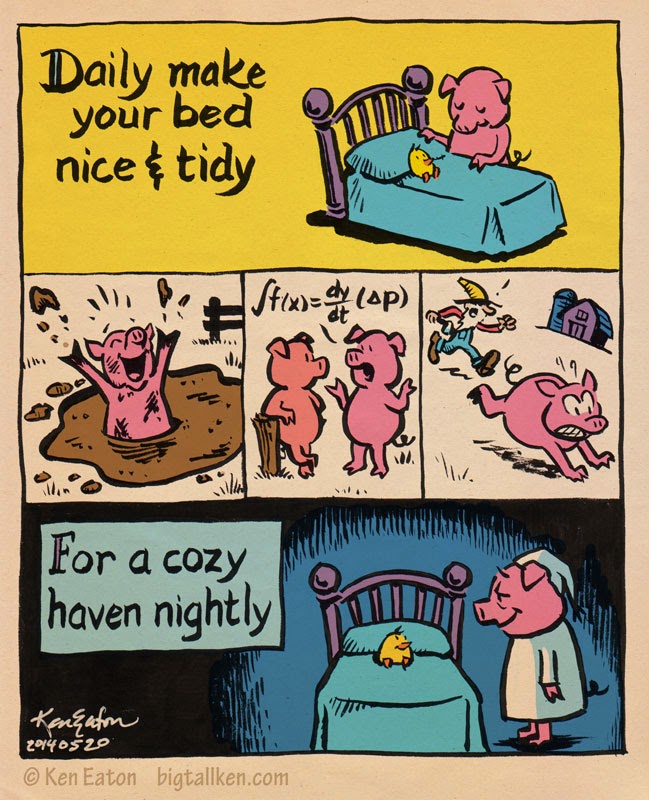 The cartoon below was drawn in ArtRage.  I redrew it with a brush pen above, which was much more satisfying and colored it to fit with the rest.  Now to my haven! 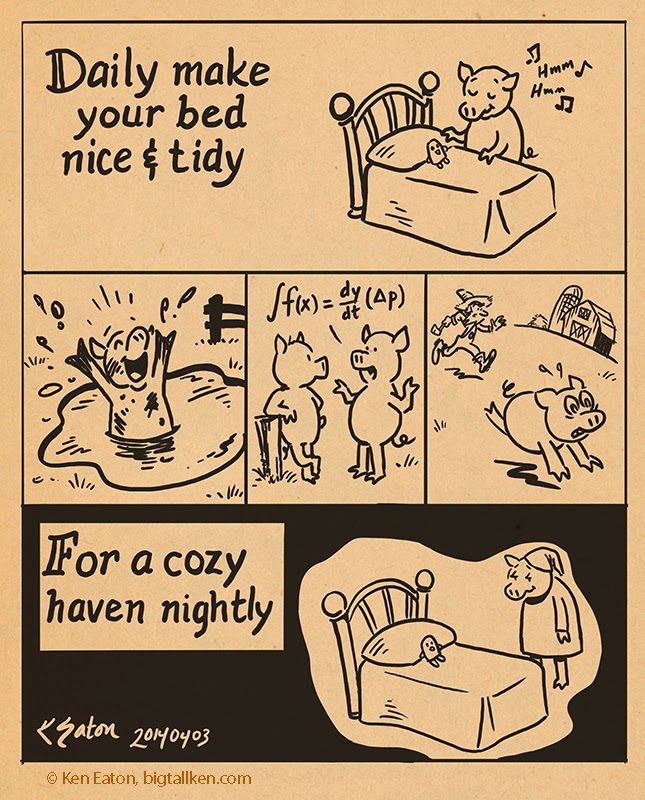 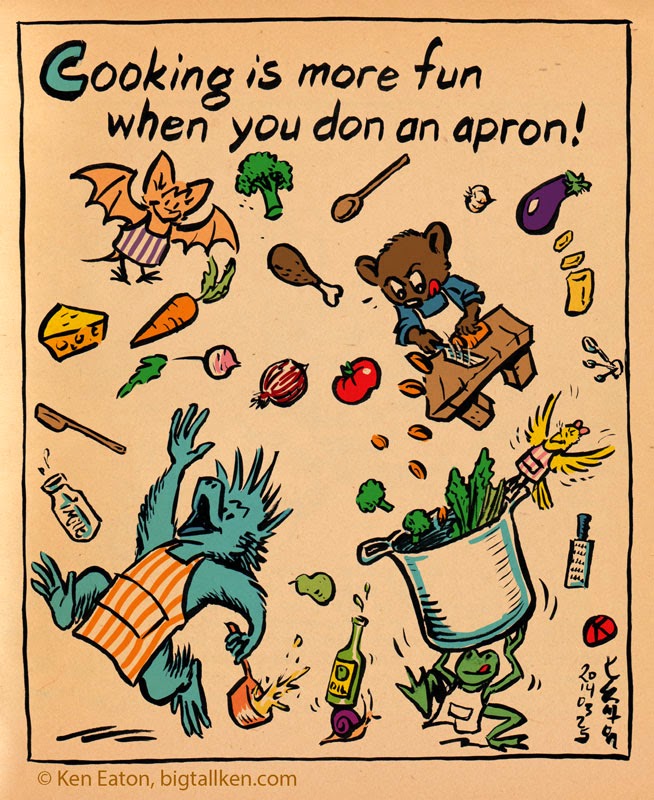 I'm not afraid to admit that I like to put on an apron when I cook.  It's my uniform stating I am in control of my kitchen.  When it comes off it's time to eat!

Please note the "claw" hold the bear is using to cut the carrot to prevent cutting fingers.  Here are some tips.
http://culinaryarts.about.com/od/knifeskills/ss/knifegrips_3.htm
http://www.wikihow.com/Chop-Food-Like-a-Pro

Also of note this was my first Words to Mull & Cull using a Pentel brush pen instead of a natural hair brush and India ink, which allowed me to ink it on my lunch hour.  I enjoy sketching with the brush pen but always felt it was a little finicky compared to a traditional brush and avoided doing "final" work with it.  At the end of the day it really looks about the same.

I picked up several brushes at Target last year where I found them on a clearance rack, but you can find them easily on-line.   Here is Pentel link.  The color brush is what I use.  I haven't tried the official brush pen and can't speak to the difference.
http://www.pentel.com/store/color-brushtm-pigment-ink

This was my first sketch that was going nowhere.  Apron. Check.  Stocked kitchen.  Check.  Fun?  Not so much. 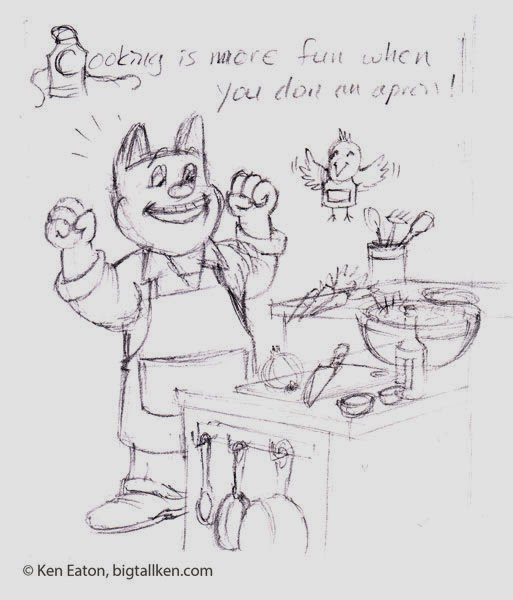 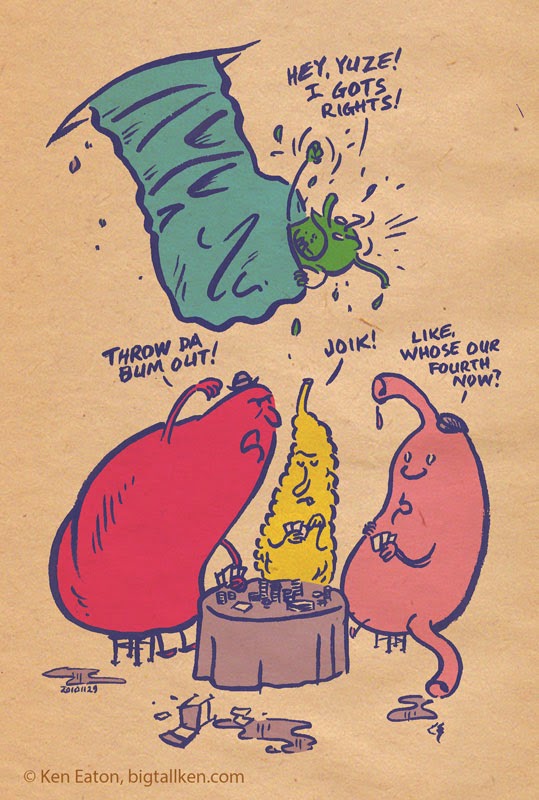 I enjoy making cards for family and friends and try to do it when I can. They're a fun challenge (most of the time) to make rather than slogging through stores for the right card.  I have been hesitant to post them because I've looked at them as a gift unique to the person I sent it to, but a lot of time has passed with most of them.  Maybe someone will find them inspiring.

In this case a family member was having his gall bladder taken out.  It was a good organ gone bad.  Who'll join the liver, pancreas and stomach?  One of the kidney twins?  The gloved hand would have come off better with the fingers facing out.

I thought about making a line of cards to dealing with serious illnesses and operations but never followed through.  Why not a card specific for a heart bypass or brain surgery?
Posted by Ken at 10:51 PM No comments:

Mull & Cull #14 - Are you trapped? Find a screen to look through rather than at 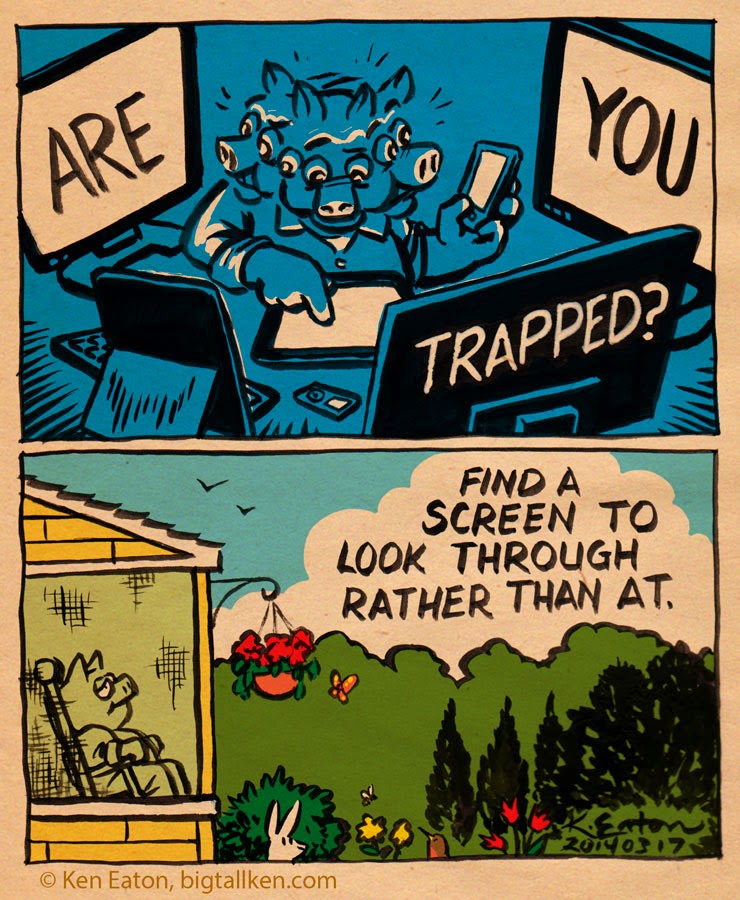 I know people at work with that many devices and monitors.  ML and I use my porch nearly every weekend in the warmer months to enjoy a dinner and the fruits of our garden and landscaping efforts free of bugs and intense sun.  There are always birds taking a break in the pond.  In the mornings chipmunks stake out their territory with chirps.  Hopefully you can find a window that at least has a view of the sky or a patch of green wherever you're at. I'm fortunate to have cubicle at work that looks out at a marsh and trees that are just beyond the parking lot. 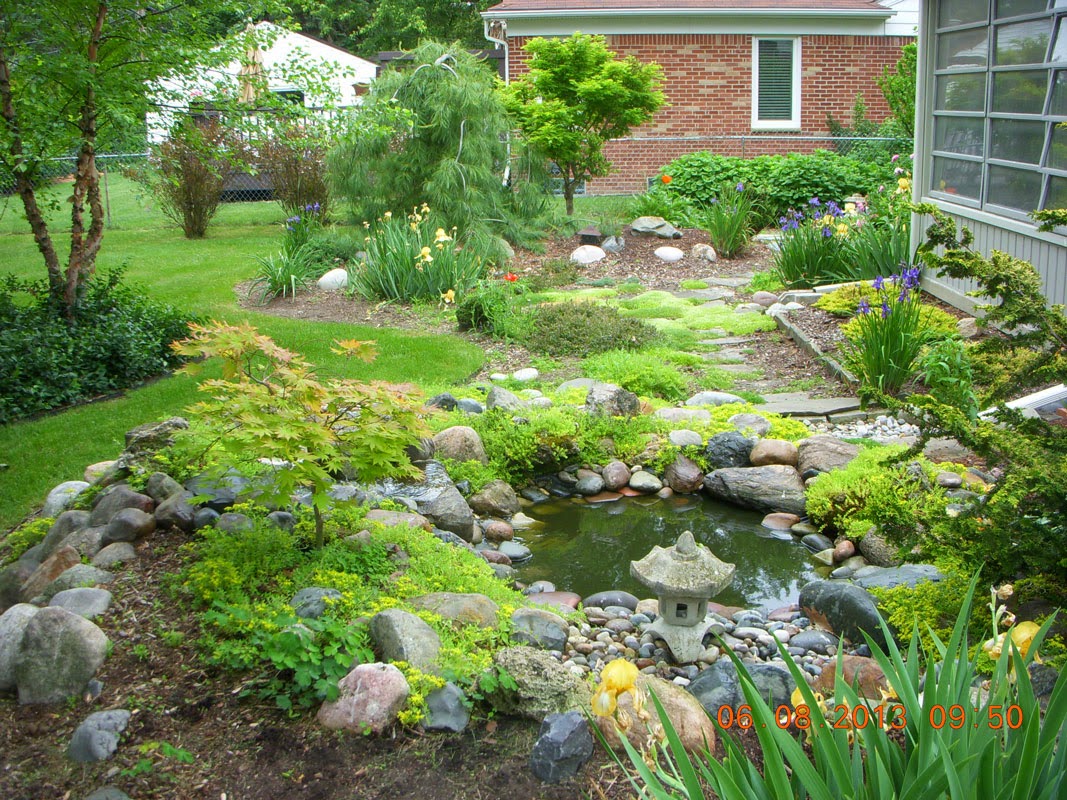 This was an illustration for a T-shirt promoting the Big Lake Brewing company in Holland, Michigan.  Again this was inked in ArtRage where I made extensive use of the circle template.

I also used some photo reference here.  Yes, that is a real floppy disc. 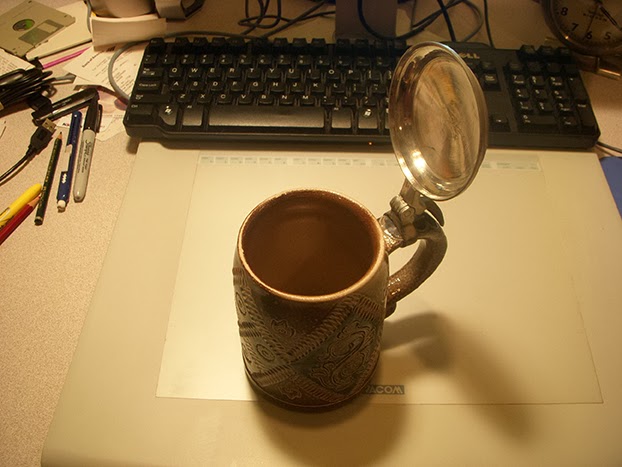 Here are a few rough sketches.  The request was to have Michigan's lower peninsula in the beer foam.  It took a few tries before I found something the client and I liked. 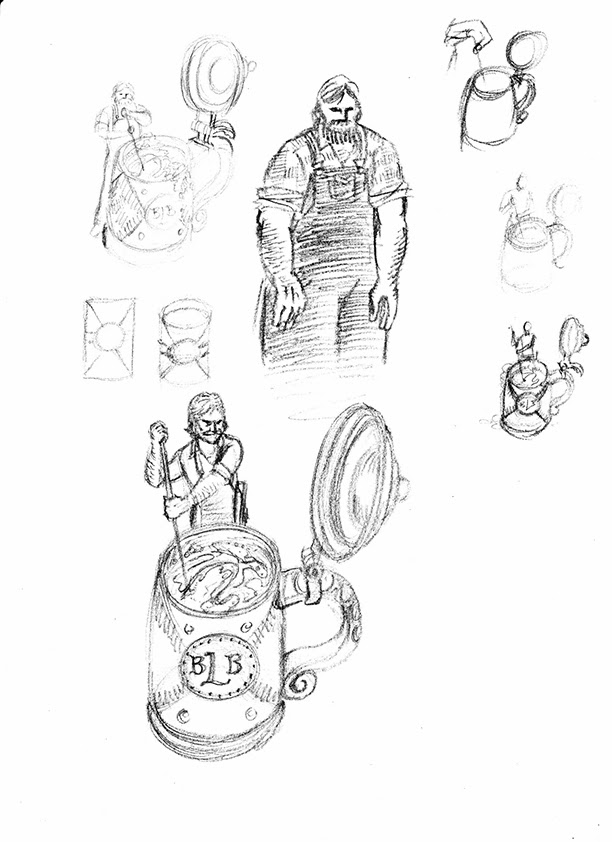 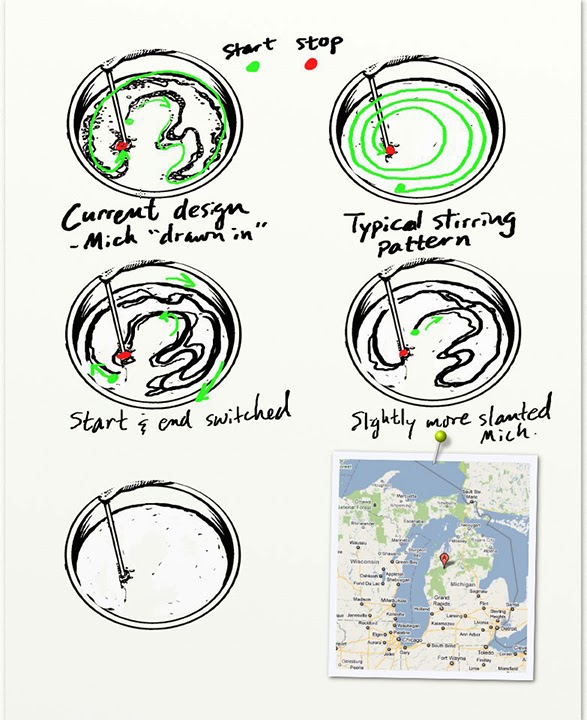 This was a fairly recent illustration done for a Latino community center as part of a placemat activity for kids to learn about the healthy food plate concepts from choosemyplate.gov. I was given about 40 items to place in there and was given freedom to fill the rest.
The illustration was sketched up and inked in ArtRage.  Then it was exported at 150dpi as a TIF and brought into Inkscape where I converted it to vector art.  I closed as many shapes as possible so I could auto-fill shapes with color in Adobe Illustrator CS6, using the live paint bucket tool.  Once I filled in all the shapes I used Object>Live Paint>Expand to make the colored areas editable.  This saved a tremendous amount of time as I usually draw colored shapes behind the line art.  I learned to cheat perspective a bit so the food would be more clear to the kids.  Never stop learning! 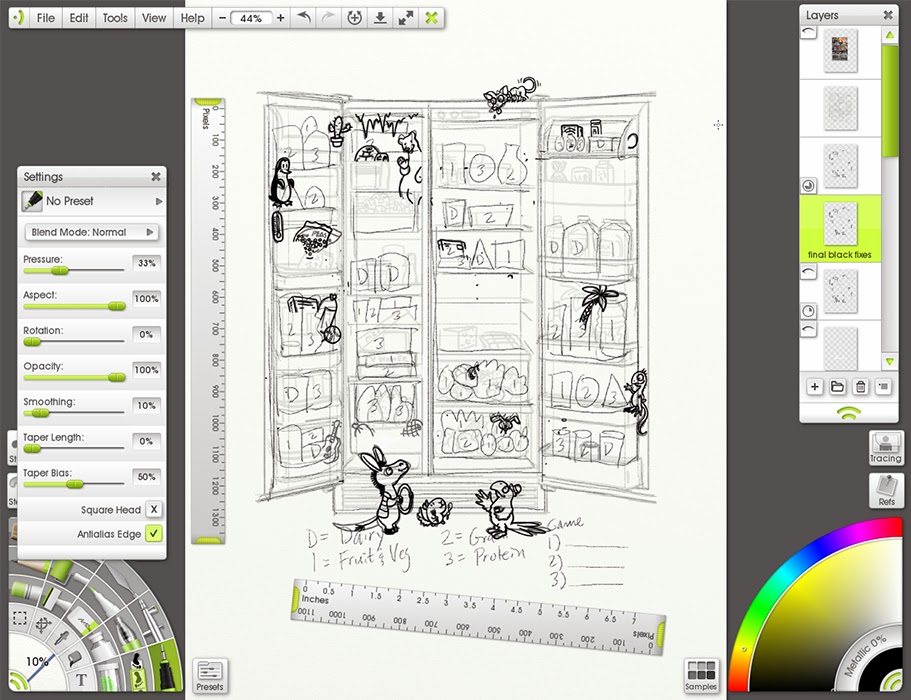