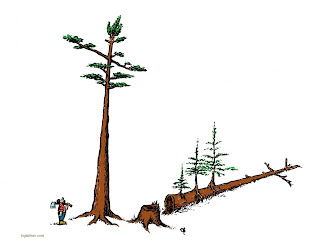 I was going to post an image of President Obama standing tall in the face of opposition on the health care reform bill, but as I thought about it most every president has had to stand tall on some issue. Not every one is successful, though; hence this image.
In our travels ML and I have seen some impressively tall trees in the Hoh Rain Forest of Washington state and in the California's Mariposa Grove. When these trees topple they become a nurse tree where saplings can take root and grow.
If someone gets chopped down on an cause they stand for, that doesn't necessarily mean the cause is dead. Others may come along to build off the work that was done and carry it further. U.S. health care reform has been an issue since the early 19oo's. It's taken almost 100 years for something to be done about it as imperfect as it may be.
Carrying this analogy one step further - not all causes should be carried on, extremism, hate, fear mongering, etc. for you may just reap what you sow.
About the art:
This was penciled in non-photo blue, inked with a #3 brush on linen stock, scanned into GIMP and colored in ArtRage3 Studio Pro.
Posted by Ken at 11:40 PM No comments: 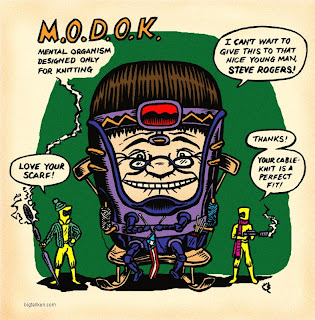 For some reason I felt inspired this year to contribute to March MODOK Madness. I do have a soft spot for this once obscure character. I discovered him back in "What If" #37. Although I bought several comics growing up I was not a serious collector and had no idea who this character was. Something about MODOK's giant head of matted hair painfully squeezed into that crazy chair outfit slightly disturbed me. What was more disturbing was Giant Man jumping on top of it and shaking him around. Poor MODOK seemed so fragile and pathetic after just freezing Captain America with his "invincible" mind beam. This issue gave just enough information to let you know he is a mad, genetically altered scientist on one hand bent on world domination but on the other hand feels the world needs his genius. I didn't get it, but I do remember being briefly obessed with drawing this guy and another bizarre villain, Arnim Zola. Here is a page from that issue. 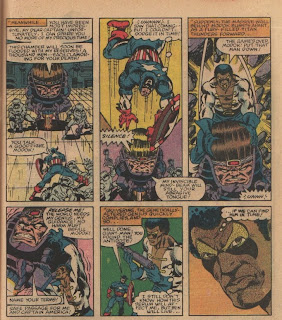 The once obscure MODOK now has fame with his own fan pages here and here. I decided instead of a Mental Organism Designed Only for Killing (M.O.D.O.K.) that Knitting might be fun substitute for K. Sitting upon his Rocket Rocker all his yarn and needles are neatly stored in his armor, and he has his A.I.M. henchmen on hand to try out his wool products.

Email ThisBlogThis!Share to TwitterShare to FacebookShare to Pinterest
Labels: MODOK 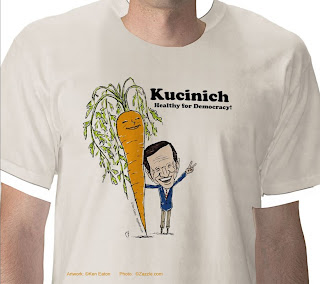 I feel a bit like a prophet. In November 2008 I made this T-shirt design as a Christmas gift, which I posted about earlier.
Dennis Kucinich has received quite a bit of press this last week for his change of heart in choosing to support the Obama health care reform plan, which has now passed! When I made this shirt I was thinking of organic vegan foods and health not health care policy. Funny how the meaning of art can change with time.
If you would like to purchase this T-shirt, you can do so at my new Zazzle store and can even order it on an organic T-shirt! The one shown here also provides the wearer the ability to separate their head and arms from their body! Amaze your friends!
"Wait!" you say? What does this have to do with Tall Tuesday? Well as you can see from this picture of the Kucinich's Elizabeth is quite a bit taller than Dennis. Her MySpace page lists her as 5'10", which, granted, is the bottom end of tall for women. Other sites list Dennis as 5'7". Assuming she is wearing 3" heels in this photo she is at least 6" taller than Dennis. This is a striking difference in height to say the least, and, after all, tall is relative. 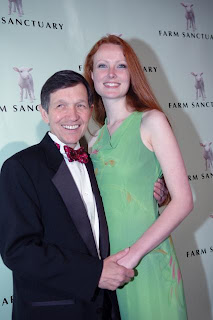 From what I've read in The Tall Book it is not easy for women to "date down", i.e. date someone shorter than themselves. Ladies read Elizabeth's lovely story of how they found each other. It can happen.
Posted by Ken at 12:01 AM No comments: 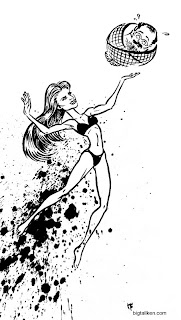 In "The Tall Book" I learned about tall fetishes for the first time. I live a sheltered life. Anyway I caught a "Seinfeld" rerun at about the same time where George (5'4.5") wanted to have sex with a tall woman. I must have been reading some quotes from Gabrielle Reece in the book and thought of her with George. She's 6'3", a former pro beach volleyball player and model. I thought of her treating George as only she could since he was always getting stuck in awkward situations with women in the show.
Jason Alexander is a fun guy to caricature and almost hard to draw wrong. Gabrielle Reece was more difficult. I had to completely redrew her face in Photoshop. YouTube volleyball video was referenced to try and draw the pose in a way that looked right. The artwork was inked with a brush. Then I spattered ink on a separate sheet of paper and layered it in with Photoshop.
Posted by Ken at 9:53 AM No comments: 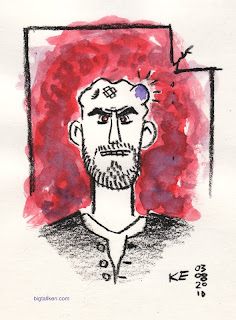 This was going to be sentimental posting. Instead it's an exercise in one handed drawing and typing, while nursing an ice pack on my head and resisting the urge to taking a sledgehammer to destroy my basement's drywalled duct work! I have blue painters tape to mark off the edges but still forget where I'm at! I was flipping through a photo album underneath one and nailed an edge when I stood up. This is one of the disadvantages of being 6'7" and why I hope I keep my hair, so it hides the numerous bumps!
Artwork: charcoal pencil with angry red and bruised blue watercolor.
Posted by Ken at 3:01 AM No comments: 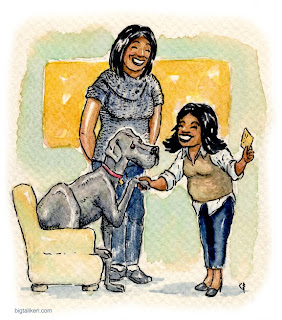 ML also records Oprah daily. Thankfully she showed me this, "That's Incredible!" show from February 23rd. There were several guests on the show, two of which stood out as the world's tallest. One was Marvadene "Bubbles" Anderson, at 6'10" the tallest 16 year old in the world and is predicted to hit 7'1". She recently moved to the U.S. from Jamaica and is very well spoken and charming for her age with a strong sense of self and good sense of humor. I am confident she will meet her goals of playing in the WNBA and being a pediatrician or whatever she sets her mind to. I hope her body is able to keep up with the pressures of basketball training as she was shown using crutches.

Another guest who also exuded personality was George, the world's tallest dog. He is a great dane about 43" to the shoulder and 7'3" from nose to tail. He looked quite at home sitting in a chair with his front legs propping him up.

About the art:
I used an old piece of Strathmore 400 series watercolor paper that was yellowed with age. I lightly penciled in the rough, put down the watercolor then used a crow quill pen to ink over it. The rough paper is not ideal for the pen but was heavy enough not to tear. I was trying to keep it spontaneous looking like the work of Richard Thompson or John Cuneo (NSFW), which was not as easy as they make it look, especially when I don't use my watercolors that often. Working with traditional mediums makes corrections much more tricky, too. I added a line in George's hind leg that should not have been there but was able to clone and smudge it out in Photoshop. I also used Photoshop to add highlights to the noses of Bubbles and Oprah and white space around the dog's head to break it out from Bubbles' clothing. The original art is about 6"x6".
Posted by Ken at 3:01 AM No comments: