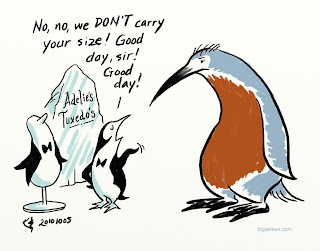 For Illustration Friday posting of "beneath" - this gives a good sampling of sea life beneath the (rapidly melting) arctic ice.
Posted by Ken at 11:43 PM

I heard about this giant penguin also like your take on the topic. I like your little stripe that you have posted also

brilliant. i spat my latte right out on the screen. i lovvvvvve the extra "GOOD DAY SIR!"

A belated thanks to everyone's posts. Froggie I apologize for your messy screen. The "Good day, sir!" came to me from an episode of That 70's Show where Fez said something to that effect.