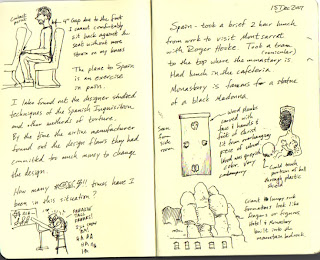 I was just able to fit this in before Tuesday is over! I had to finish an illustration job first.
Airplane seats are the bane of the extra tall everywhere. I had to fly for work recently and was able to enjoy one again. This sketch is from a couple years ago when I had to fly to Spain for an assembly line run off. It's pretty self explanatory.
About the art:
This is a scan from my one time experiment with a Moleskine sketchbook. They are attractive and solid, but I didn't care for the cream color paper and thought the texture was too smooth. It also took me time to use it feeling it was too precious to mess up a page. I don't sketch much from life due to time and lack of inspiration, but the facing page has some Montserrat.
Posted by Ken at 11:57 PM No comments: 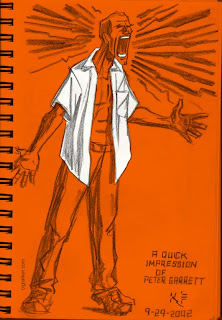 On a side note ...
While browsing the Illustration Friday postings I discovered the work of Ann Raff and this fun watercolor she made. Revel in the tall trees with the birds!
Posted by Ken at 12:42 PM No comments: