Return to the Blog

My friends, the growth of my big long blog has been stunted for quite some time.  It's time for a growth spurt.
To start let me update you on my last post on the Team Cul de Sac submission.  I am proud to say that it was accepted and made it to page 32 of the book, opposite of Greg Evans, creator of the comic strip, Luann.  It ended up selling in the on-line auction for $100, which I thought was pretty good for an unknown in the comic strip field.  I felt honored to be in the company of such great comic strip artists such as Bill Watterson of Calvin and Hobbes fame and Patrick McDonnell of Mutts.  The book was nicely done with good quality pictures of the artwork and good paper stock.

I have had some illustrations jobs over the past couple years, some of which have been added to my website, but I haven't posted about here.  Here is one of them.  This cat and dog were done for the Huron Pet Store in Ann Arbor.  They wanted to update the mascots for their kid's program. 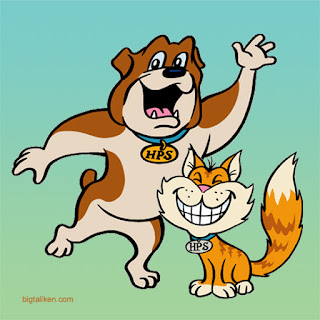